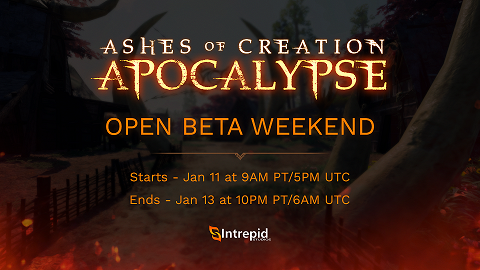 FROM ASHES TO EMPIRES. YOUR PATH WILL SHAPE THE WORLD.

Ashes of Creation is an upcoming MMORPG developed by Inteprid Studios

If you didn’t have a chance to participate in the Ashes of Creation Apocalypse in December, you’re in luck; Intrepid announced another beta test starting today!

Official AoC Discord “Join us for our Ashes of Creation Apocalypse Open Beta test from Friday, Jan 11 at 9AM PT/5PM UTC until Jan 13 at 10PM PT/6AM UTC.”

Apocalypse is the battle royale mode, a feature of the full MMORPG Ashes of Creation. The mode was originally designed as a fast way to stress test combat, performance and latency, but late last year Intrepid turned it into a standalone mode that could be freely tested as an open beta for anyone, presumably in an attempt to get more bodies for testing.